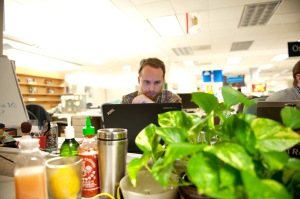 In the rare moments when he moved out from the glow of his computer screen into the public spotlight, the role that proud Ohio native Toby Fallsgraff played on President Obama’s re-election team was not always clear. Labeled in some quarters as “a member of the campaign’s technical team” and in others as “a director on Obama’s marketing campaign,” the post-election consensus has settled on “email director.” At least, that’s how he describes himself when he serves as a keynote speaker. (His best lesson learned? Apparently, no presentation can be successful without at least 3 cat photos.)

With a political resume like Fallsgraff’s — OFA, DNC senior e-mail campaigner, former congressional campaign manager, M&R Strategies consultant — it would be tempting to assume he’s just a one dimensional DC junkie who speaks in soundbites and measures the  worth of the day in dollars raised. But one would be wrong to do so. Ever since he was a student who stood out in the crowd, the narrative of Toby’s life — at least as described by others — has been one of a politico with a heart that truly beat for music.

When Toby left Ohio for DC, “he left behind a musical legacy.” And when he returned to the state to run the 2008 congressional campaign of Bill O’Neill, Cleveland’s Scene Magazine couldn’t help but note that he was “a guitarist for a rock band called Daddy’s Gonna Kill Ralphie, when he’s not trying to get O’Neill elected.”  Even if Toby doesn’t always know the words to his own songs, he’s the type of person who would organize a tribute concert when one of his favorite musicians passes away. In other words, he cares.

I spoke to Toby recently about his tastes and interests in music. His answers were the basis for the 16 songs of this mix:

How would you describe your taste/interest in music?

I’m not one of the “I love everything” kinds, but I don’t really believe those people anyway. Except for songs sung in a fake country drawl, or ones that are hilariously religious, I’m pretty open to most things. But if I’m going to add you to my music library and get evangelical about you, chances are you’re making thoughtful pop with a good sense of melody (bonus points for ambitious vocal arrangements).

How did you first get interested in music and how has your taste developed since then?

I was raised in a Beatles household the way some kids are raised Catholic. The first record I bought with my own money was Michael Jackson’s Dangerous. And I actually remember hearing Green Day’s “Basket Case” on the radio for the first time and freaking the fuck out. I dabbled in Nine Inch Nails but not got much heavier or more into the devil’s music than that. Then, I spent all of the early 2000s wanting to be Elliott Smith, but unwilling to commit to the hard-drug and greasy-hair lifestyle.

The real synthesis of all of this is when I worked at an indie rock radio station, and fell in love with bands like The Mountain Goats and The New Pornographers, all while co-hosting an oldies show called “Not Your Parents’ Music” with my buddy Joe. These days, you can file me under “obnoxious friend who wants to introduce you to post-surf Beach Boys.”

Name five of your favorite songs at the moment (in no particular order).

The Beach Boys – “Slip On Through”

The Band – “Across the Great Divide”

Name five of your favorite albums of all time (in no particular order).

I find it difficult not to be incredibly obvious when you get into the “of all time” arena.

Elvis Costello and the Attractions – This Year’s Model

Neutral Milk Hotel – In the Aeroplane Over the Sea

The Mountain Goats – We Shall All Be Healed

What are some songs to which you have a particular emotional attachment?

This is tough because I tend to put the music I’m really digging into temporal context, so they’re usually pretty tied to the feeling of that era. That second Shins record, for instance, puts me right back in those freezing guest rooms I stayed in when I was on the Dean campaign in Manchester, NH. The songs that transcend their original contexts are the ones that I feel the most attached to. Songs like “Carry Me Ohio” by Sun Kil Moon and “Giant Spiders” by Devin Davis are kind of like good friends at this point.

What are some of your musical guilty pleasures?

Does anyone really need to feel guilty about the music they like. Unless you’re going all in on bands like Train or Hootie and the Blowfish or something (and let’s be clear, I’m not entirely sure those people are capable of feeling guilt anyway), I think I’d refuse to say I feel guilt regarding my enjoyment of music.

That’s a cop-out, right? I know what you’re asking. People are sometimes surprised to know I enjoy the Spice Girls and *NSYNC (and that I know where the star goes in their name).

What goes into a good mix?

I’ve given this way too much thought in my years, and there are a number of rules I try to abide by – one song per artist, establishing pressure points (usually tracks 4 and 11/12) that the rest of the mix builds around.

I’m also a big believer in the wild card. Most mixes I make have a natural fold – the point where you have to take whatever path you’ve been going down and completely turn it all on its head.

If you were running for President in 2016, what song would you use as your campaign theme?

I feel like this is an ageist question. Just because I will turn 35 in the year 2016…
Maybe “Eye of the Tiger”? Or the first few seconds to the theme song of “The Many Loves of Dobie Gillis” on a loop…

What is your process for finding music that is new to you?

Friends, music blogs, and just tooling around on Spotify. Lately, I can feel myself falling behind. The campaign really accelerated that process. But I’m getting old and less cool and I really have no idea how someone like Dan Weiss does it.

What is your opinion on downloading copyrighted material without paying for it?

I have no problem with this, assuming folks know how the economy works and support artists so they don’t have to resort to a lesser career or selling their songs to a Mexican cigarette company. Here’s where I play the “I’m in a band, too, and I don’t care if you steal our music.” (Also, Mexican cigarette companies, if you’re reading this, I have the perfect song for you.)

To hear a mix, created by me and based on Toby’s description of his musical interests, click HERE or listen here:

2) The Glands — I Can See My House From Here

4) Bonnie Hayes With The Wild Combo — Inside Doubt